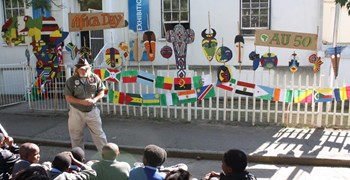 The National English Literary Museum (Nelm) and Albany Museum have joined the worldwide museum community bandwagon in celebrating the 2016 International Museums Day (IMD). Nelm is a South African national institution under the national Department of Arts and Culture, and Albany Museum is an Eastern Cape state-aided museum under the Department of Sport, Recreation, Arts and Culture. Albany Museum has a natural science, social science, a Victorian house, a garrison and Provost (prison). Nelm, on the other hand, collects and preserve South African literary heritage of all genres, including press clipping, manuscripts and other artefacts that were belonging to some of the writers.

IMD is held on the 18 May every year since 1997 by over 30 000 museums all over the world, but the two museums decided to have a week-long celebrations. The two museums wished to use this opportunity to meet the public, an evolution that International Council of Museums (ICOM) and museums are trying to undertake, with the strong belief that their presence and actions can develop and transform society constructively.

ICOM provided Museums and Cultural landscape as the theme for this year.

Albany Museum’s outreach team, championed by Nozipho Madinda visited the museums in Somerset East on Monday, 16 May 2016. On Tuesday the following day, they visited the Fort Beaufort Historical Museum. On Wednesday, Albany Museum displayed its mobile museum artefacts outside of its premises, inviting Somerset Street, High Street and Rhodes University passers-by to an interaction.

Nelm, in the meantime, invited many of those who have been admiring the construction of the new building at Worcester Street, to come in and have a feel of it. Many obliged, indeed, on the 18 May. Lebo Mashile was at hand in the afternoon, conducting an interactive workshop with the promising Cycle of Knowledge, a group of local artists that include Rhodes University students. They were joined by ten students from the Steve Biko Centre in King William’s Town that are undergoing a 24-month long Arts and Culture programme. Killing two birds with one stone, the evening was graced by the presence of literary stalwarts, Ama Ata Aidoo from Ghana, Zakes Mda and Professor Keorapetse Kgositsile. Celebrating Africa Month under the auspices of DAC, they delivered a lecture and some readings to the enthusiastic crowd that was beaming at the seams of the newly-built Nelm theatre.

The last two days of the IMD week, Thursday and Friday, saw Nelm and Albany Museum visiting the two local places, the Queen's Street taxi rank and the Market Square shopping centre in Grahamstown. Madinda was assisted by Boniswa Tana, a general assistant in the Archaeology Department, Khokela Camagu, a contract worker in the Palaeontology Department, and Zola Sixaba, an intern artist in the Education Department. This was part of taking the museum to people, and showcasing the cultural landscape of the two museums. Strange enough some continued to appreciate the gesture, whilst many thought that the books and artefacts are for sale. Others shy away, afraid of the wild animals in cases, and others sought literature in African languages. However, there were those that remembered their hunting days and all the funny stories that they have heard about wild animals whilst still at school.

ICOM, the custodian of IMD, reports that the richness of our historical heritage, preserved and displayed by museums, together with the inventiveness and vitality that have characterised the museum sector’s action in recent years, are where the strength of museum institutions lies today.