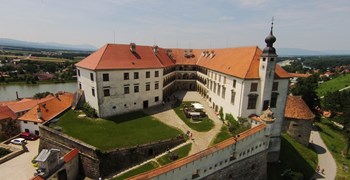 Ivan Bajde was known in Carniola and other Slovene regions as well as in today’s Austria and Germany, and his name can even be found in French and American newspapers from the beginning of the previous century. But what exactly was he mentioned for? Bajde was best known for his invention of the so-called Piano-Violin – a piano that produced the sound of stringed instruments. After buying Bajde’s patent, Ludwig Hupfeld used some innovative components in the design of the Phonoliszt-Violina, with which the Leipzig factory achieved world renown. A modest but exceptionally smart inventor with Slovene roots was hiding behind the scenes of Hupfeld’s business successes with the Phonoliszt-Violina.

Ivan Bajde was born on 12th June 1855 in Zgornji Hotič near Litija. Both music and innovation attracted him from his early days, but the reason why he started to take his musical inventions seriously and to present them at various exhibitions and fairs still remains unknown. The first such large presentation was in 1892, when Bajde presented his so-called piano portativ, which produced sounds of a zither, harps, and bells, in Vienna as part of a major international exhibition entitled Internationale Musik- und Theater-Ausstellung Wien. And this was only the beginning of Bajde’s appearances in public. In hope to sell some of his patents, he travelled several times all over his homeland and abroad, and performed concerts on his unusual musical instruments.

In 1901, Ivan Bajde moved from Zgornji Hotič to Ljubljana with his family. In Spodnja Šiška, he set up a workshop in which his sons Ludvik and Josip occasionally worked as well. His son Ludvik, who had considerable technical knowledge as well as an education in music, continued his father’s tradition of innovation. One of his own inventions, the so-called claviolina, was produced from 1912 onwards at Dunajska 73 in Ljubljana, where a sign hung above the entrance to the workshop: BAJDE & Comp., Piano-Violin Manufacture.

Although Ivan Bajde received professional praise at home and abroad, and though he could never recover the financial investment into his inventions, he never gave up such efforts, and his works entered the history of Slovenian and world inventions. The numerous facts about Ivan Bajde’s musical inventions give a clear picture of an inventor of Slovene origin, who had many ideas and visions, but unfortunately lived in a time and place that was far from favourable for a man of his abilities.