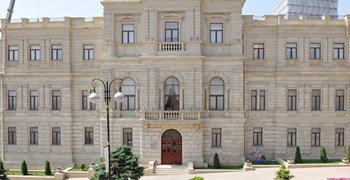 Azerbaijan art is known by many spheres of art made a contribution to world culture. Undoubtedly, metalwork also plays its role among these kinds of art. Ancient ore and well remains discovered on the territory of Azerbaijan prove that as far back as the epoch of late Stone Age rich deposits of iron ore were used here by hand and simple drilling. Metal artworks from Nakhchivan, Mingachevir, Gadabey, Qadabay, Qazakh, Ganja and other places are about 5000 years. The important stage of development is connected with copper discovery. After copper production people began to make from it various things fit for farm. Several big cities in the Middle Ages became copper manufacturing centres as copper manufacture appoved itself as the art.

A number of travellers and historians gave information in their works about rich metal deposits of Azerbaijan and their use. One of them was Albanian historian Moisey Kalankatuyski lived in VII century. Giving information about natural and mineral resources of Caucasian Albania he wrote in his works: “In the mountains of beautiful country are extracted gold, silver, copper and yellow paint...”. In 1474 Venetian traveller Kontarini staying at the palace of the ruler of Aghqoyunlu state Uzun Khasan noted that everyday about 400 people in the palace of governor were served a meal in copper tableware of various types.

At the beginning of XIX and XX centuries copper tableware made by Azerbaijani craftsmen exhibited on various exhibitions was deeply appreciated and received an award. So there can be mentioned exhibitions of 1850 "Works of trans-Caucasian land" and of 1873 "World-wide Vienna". One of the interesting aspects is that when mostly copper-smiths engraved on things their signatures, dates according to Moslem (Hijri) and Christian calendars, lines from the literary works of great poets Sadi, Hafiz, Nizami and other  classics, religious words, prayers, names of imams, edifying words, they  made their  mark on history as unique pearls of  Azerbaijan culture preserved nowadays in world museums. Such types of things can be met among the exhibits in the section of artistic metal of Azerbaijan National Museum of Art.

During the history of Azerbaijan not only several streets but even majority of population occupied the irselves with copper work. There are more than 40 types of copper handmade works. They are divided into five groups: dinnerware, tableware, water jar, milk jug and home things. From ancient times the main copper production centres  were Ganja, Nakhchivan, Shamakhi, Baku, Ardabil, Tabriz and Lahij. From XIX century Lahij became the main copper production centre, made here by craftsmen and decorated with complicated and delicate patterns jug, bathhouse trunk, sherbet dish, satil (a copper bowl for holding liquids), milk pail, round tray, serpush (for covering pilaf in order to keep it warm), basin, saucepan, lamp, aftafa and other items were known in Central Asia, Dagestan, Georgia, Iran, Turkey and other places. Articles made in Lahij were considered the  leading in quantity and quality among the central cities of that period. In XVIII century in Azerbaijan metal home things were decorated in 5 technical methods: smithery, engraving, molding, tracery and enameling.

Recently news was glad for Lahij craftsmen and all Ismayilli citizens. There was given a new present for our country - “Lahij copper production art” was included into the list of representatives of non-material cultural heritage of UNESCO.

April 18 is the International Day of Monuments and Historical Sites

March 31 is the Day of Genocide of Azerbaijani people. 104th anniversary of the genocide against Azerbaijanis.