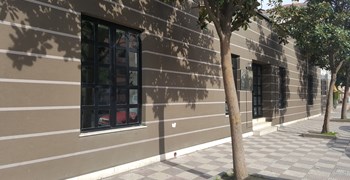 The house of Rrakacolli family

The idea of projecting the house comes during the 19th century by Arsen Idromeno, who was welcomed in Shkodra as a carpenter and for his skills in designing houses. He was the father of Kolë Idromeno, a painter, photographer and architect, one of the most prominent figures in Albanian culture. This was not the only work of Arsen Idromeno in Shkodra as he designedother buildings including the gymnasium “Illyricum” led by the Franciscans, the former building of Red Cross and other houses, including the house of Rrakacolli family. The location of the house was central with entrances in four different directions of the city. The house included big yards and gardens.

With the passing of the years, Austro-Hungarian Empire bought the house and established a dormitory, by adopting the building to the new function. On April 26, 1908, the dormitory opened and served the kids of poor rural people and orphans. The activity was directed by the Brothers of Christian Schools (Schulbrüder) from Austria. The institution offered free studying and lodging for the students who attended the school of Franciscans, which was nearby. The dormitory would host a maximum of 100 children and the costs were covered by Austrian government. During the Montenegrin bombing in 1912-1913, the building was damaged including other religious buildings in the city.  The dormitory was active until 1917. On the same year, the activity of the dormitory was interrupted because the WWI was in its peak and the Brothers of Christian Schools were called into war and this led to the closing of the dormitory. After the war, the building was given to the Archdiocese of Shkodra, as a compensation of damages. Later Monsignor Jak Serreqi gave the property to be used by the Town Hall of the city.

On 1918, the Municipality of Shkodra decided to transfer the Civil Hospital in this building. This was mainly because of its space and location in the central part of the city. In 1927, the hospital reached its highest capacity with 70 beds. A surgery room and anteroom was created for the first time in these premises. A special room was created for the surgeon. During those years, the Red Cross brought a sanitary mission composed of American doctors and nurses who also helped in bringing medical tools. This mission was led by a Major surgeon who was conducting the surgery with the help of Dr. Basri Qadhimi. The civil hospital of Shkodra was administered by the municipality until 1928, after it was under the State administration. The hospital was operating in this building until 1930, after this year the Franciscan Province bought the building and turned it into a college.

Not having a separate building and space for the Franciscan College, the Provincial Father Vinçens Prennushi decided to buy the building from the Archbishop of Shkodra. So Father Prennushi paid 6000 gold napoleons to the Monsignor Lazër Mjeda. In October 1930, the day of Our Lady of Good Counsel (the Patroness of Shkodra), the College was transferred in the new building from the elementary school, its former location.

During the initial phase of the activity, the College was directed by Father Anton Harapi and deputy director Father Donat Kurti. Under their lead the number of college students reached 30. The quality of the education was highly improved following the Franciscan ideology “Atdhè e Fè” (For the Motherland and Religion). Part of the main curricula included painting and music, and the theater performances were frequent especially during the religious festivities. In the later years, the chairmanship of the College was subject to changes. The directors of the college would change including Father Marin Sirdani, Father Anton Harapi and Father Çiprijan Nika. As time went by, the number of the college students started to decrease because of budget cuts. With the coming to power of the Communist Party, began a wave of horror and persecution against the Franciscan fathers. On March 6, 1946, with a decision of the government, all their properties were confiscated, leaving under Franciscan management the Church of St. Francis in Gjuhadol and the Convention of “Arra e Madhe”. All the private Franciscan schools were closed including the College. The students were obliged to go back to their homes. The building was confiscated and the National Security established their offices there.

Local Branch of Ministry of Interior

After confiscating the building, the local office of the Ministry of Interior was established in the city, which soon would become the most terrifying building for the citizens of Shkodra. The building subjected to changes in order to fit its new function. The main changes happened at the end of the building, the part of the storehouse of the former Franciscan college. The storehouse became detention cells and interrogation rooms. To get to the cells, there was a passage through a big yard that went beyond the main building, and at the end of the building on its right, there were former storehouses with small windows under their roof. The entrance was in the central part of the building; it was 3-4 meters long and divided the prison in two corridors. Each corridor had seven couple doors of cells which were opposite to each other, making 14 cells on the side of the yard and 15 others in the dark side of the prison which was lightened by two small windows in each extremity. During the interrogation period, the political prisoners would stay in the ground cells. After they received their sentence, they would be sent to other prisons, camps or in cases of capital sentence they would be held in a special room until the time of execution. Later on there would be some small interventions in the structure of the building in the part of the cells. The roof would be removed to add another floor for the offices of the administration of the Interior Branch; meanwhile in the area of the cells, the second floor would serve for ordinary prisoners. The building would have this function until 1992, where during the first democratic movements and after the fall of the communist regime, the building became the police station of the city.

With the changes in the government in 1992, the Albanian government continued to use the building as the Police Station of the city of Shkodra. The spaces were used for the same function as in the time of the ruling dictatorship. The cells were used as detention cells for thugs, but not for the political prisoners. The police station was operating in this building until 1997. After this year, the state gave back the property to the Franciscan Province in Albania, which in turn gives it to the Clarisse Sisters who then built their monastery.

In October 29, 2005, after the restauration of the building, the “Saint Claire” Monastery, which stood at the former local branch of ministry of interior Shkoder, was inaugurated. That is where the Poor Sisters of Saint Claire live, known also as Sisters of Clarisse. They live permanently at the monastery and dedicate their life to the discourse with God, becoming a bridge between Him and citizens they meet. The Sisters organize different activities for the community. They have the lab for binding the books, lab for sewing the clothing for religious service with traditional cloth of Shkodra and the lab for preparing the sacrament of communion for the diocese. In the yard of the Monastery there is a small church dedicated to Saint Claire of Assisi inaugurated on April 21, 2016. The site is transformed from a center of martyrdom into a praying center, bringing into collective memory the sufferings and prosecutions of thousands of innocents, inviting all to a path of reconciliation.