Considered one of Mexico's greatest artists, Frida Kahlo began painting after she was severely injured in a bus accident in 1925. She was riding in a bus when the vehicle collided with a trolley car. She suffered serious injuries in the accident, including a broken spinal column, a broken collarbone, broken ribs, a broken pelvis, eleven fractures in her right leg, a crushed and dislocated right foot, and a dislocated shoulder. An iron handrail pierced her abdomen and her uterus, which seriously damaged her reproductive ability. Although she recovered from her injuries and eventually regained her ability to walk, she was plagued by relapses of extreme pain for the remainder of her life. The pain was intense and often left her confined to a hospital or bedridden for months at a time. She underwent as many as thirty-five operations as a result of the accident, mainly on her back, her right leg and her right foot. (Wikipedia)

Kahlo never dared to depict the accident directly, though she did make some drawings and a painting entitled The Bus (1929).

The painting shows a housewife holding her shopping basket, a blue-collar guy in his work overall, a barefoot Indian mother who is feeding her baby, a little boy looking out of the window, a businessman holding his money bag and a young girl which might be Frida herself. The landscape is full of tranquility, where a shop named La Risa (The Laugh) outstands. This detail is characteristic of Frida Kahlo’s black humor, who represented the moment just before the accident in this way.

The Bus, Frida Kahlo, 1929, oil on canvas.
See it at the Dolores Olmedo Museum in Mexico City: http://museu.ms/museum/16306/dolores-olmedo-museum. 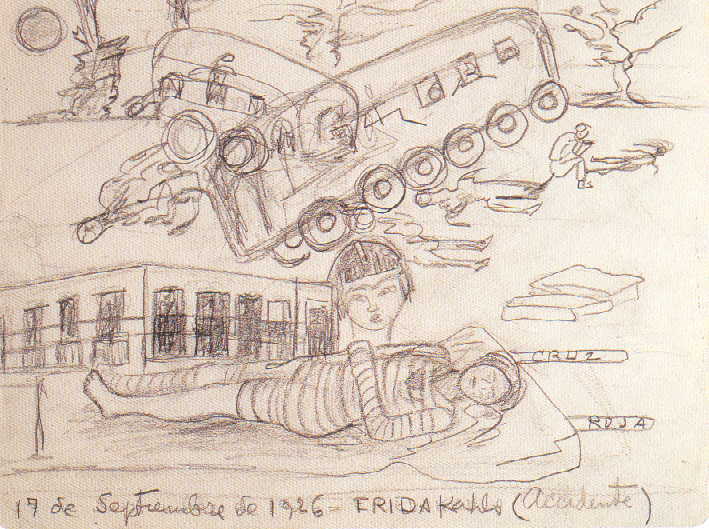